UTW DAY AT THE UTW HEADQUARTERS IN LOS ANGELES

Los Angeles is the home for Unfuck The World’s headquarters. It was here where in 2006 UTW Day creator Maike started selling Unfuck The World t-shirts to raise money for local charities and to support UTW actions.

For the last four Unfuck The World Days, UTW L.A. organized public, day-long events, celebrating organizations that are all about positive local actions. We had live music, real time video calls with people in other countries having their official UTW Day events, and we raised money for our non-profit, A Million Drops.

This year, the UTW L.A. team did something very different. We practiced what Unfuck The World stands for: Positive. Local. Action. On UTW Day 2017, we gave a make-over to 2nd Chance For Sobriety, a sober living house in Los Angeles.

Sober living instead of prison

2nd Chance For Sobriety is home to seventy men ages 20 to 45 who live there for up to a year, most of them by court order. They were transferred there from jail or prison where they did time for drug related charges.

Darrel, a young homeless man, is one of them. Our non-profit, A Million Drops, had been supporting him for a couple of years, when he was arrested last year. After he had spent two months in jail,  the judge him sent to 2nd Chance to finish his sentence. Darrel reached out to UTW Creator Maike, and she went to visit him.

Sitting in the Visitation Room, chatting with Darrel and some of the other residents, all Maike could think of was how sad the space looked, and she wondered how anybody could find the strength to make a positive life change in such a depressing environment.

An idea was born

Working as a set decorator in tv and film, Maike knew how easily one can transform a space, and quickly, the idea became a plan. With the help of her network, the vision was put on paper, a project presentation was created to help reach out to potential donors and volunteers. The goal was to beautify three areas – the Visitation Room, the Dining Area and the Back Yard. 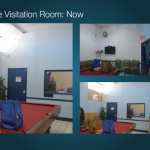 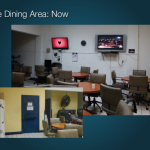 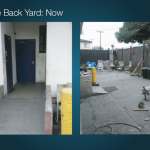 Leading up to UTW Day, our team spent weeks planning, fund raising and asking for help with needed items and materials. The support was incredible. Individuals and companies followed our call and supported the project with monetary and in-kind donations. (Please see the list below). And then it was finally time to get to work.

Volunteers and residents, working together

On UTW Day, team members, volunteers and residents worked tirelessly from 7 am to 7 pm. Together, we were able to completely transform the space. The results blew everyone’s mind, and the whole experience was so inspiring for everyone involved that we are already talking about what we can do next.