Making a difference in local communities around the globe 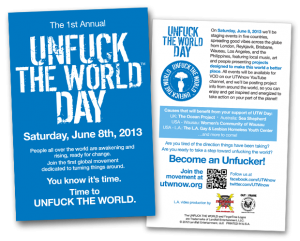 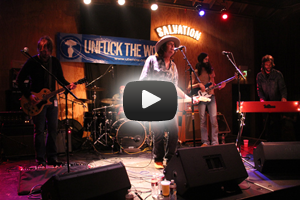 The Los Angeles event at the Bootleg Theater – Well and truly rocked by Jonny Kaplan and The Lazy Stars, feat. Rami Jaffee; Symmetry; Drew Imagination; Louden Swain; Mike the Poet; and Rob Tepper and Allison Scagliotti! Check out the video on ShockBoxTV! 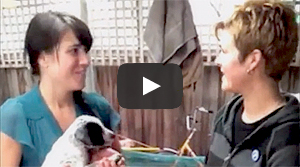 Our Australian partner Melissa talked with Beck, a foster mom with FFARL — Forever Friends Animal Rescue Latrobe about the organization’s mission to save animals, and how you can help.

Unfuck The World Day 2013 in LOS ANGELES took place at the Bootleg Theater, the perfect location for our event. Five bands and a spoken word artist performed, and inspirational people like Sylvia Alvarado of Brian’s Orchard, Kat Green of Laundry Love, T’mun King of the L.A. Gay & Lesbian Homeless Youth Center, Supun Edirisinghe of Monday Night Mission;Mike Shuttleworth of Fuck Cancer, filmmaker Michael Leoni and Michelle Kaufer, the producer of his documentary American Street Kid were invited to present their great causes and projects to the audience. They had traffic all night long, interested people stopped at their tables to talk to them, and we just heard that the first project resulting from this – a new Laundry Love project in Hollywood – is on its way. Awesome! That’s exactly what we hoped to achieve with the events on UTW Day: that people would meet, get to know each other, network and start projects, doing good in the hood! The house was packed from 7 pm on until long after Midnight, the line-up of bands and performers was truly amazing. 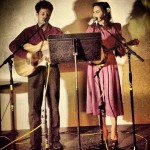 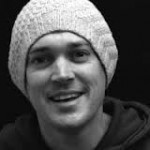 Their performance was followed by an electrifying set by iconic L.A spoken word artist Mike The Poet. 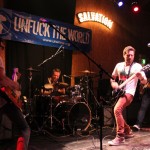 At 9:30 pm, L.A. indie rockersLouden Swain took the main stage. The band is fronted by actor Rob Benedict; his fellow cast members of the tv show Supernatural were in the audience to cheer him on, and within minutes, the band’s high energy, infectious show brought the room to a boiling point. 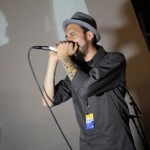 Louden Swain’s set was followed by a performance of Hawaiian hip-hop/spoken words artist Drew Imagination, who showed true devotion to the cause by coming to L.A. on a Greyhound Bus just so he could be part of Unfuck The World Day. For two songs, Drew was also joined by guitarist RobNIN3. Drew quickly won over the audience, and we were thrilled to have him! 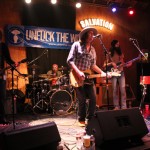 Jonny Kaplan and The Lazy Stars , feat. Rami Jaffee (Foo Fighters) & Friends, took the stage around 10:30, spreading a peaceful vibe of love and happiness. For one song, bass player Jokin Sallaveria let another bass man take over: Wyzard of the legendary funk rock band Mother’s Finest joined the band on stage for a truly historic performance! We can’t wait to share the footage of their performance with you. It’s currently being edited; for now, we have a video taken with a cellphone … 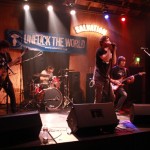 Up and coming L.A. indie rock band Symmetry was the big surprise of the night. Their explosive set blew everyone away, and we hope to have them back at next year’s Unfuck The World Day’s event! 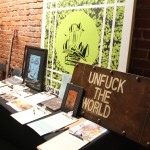 Also part of the program was a Silent Auction that included original pieces by L.A. artists Vincent Sabella and Vahe Berberian, two bass guitars, a book and a collectors pack, signed by Slash, and many other cool items. 100% of the money made from it plus 50% of proceeds from UTW merch sales – a total of $1,011.00 are going to the L.A. Gay & Lesbian Homeless Youth Center. The events of the evening were captured on camera by filmmaker Michael Caradonna, and Matt and James of ShockBoxTV! did red carpet style interviews with band members, guests and with the two organizers of the event, Johnny Cornwell and UTW founder, Maike Both. 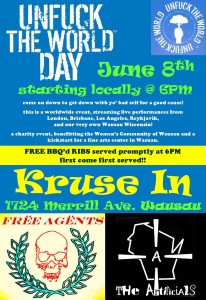 Our team in WAUSAU, WI, USA organized an event for Unfuck The World Day 2013 at the Kruse In. Six bands, including the Frëe Agënts, The Antificials, and more performed, a free BBQ was served and the Women’s Community of Wausau and a Kickstart Program for a Fine Arts Center in Wausau benefitted from the proceeds. 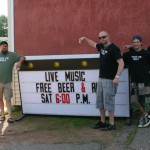 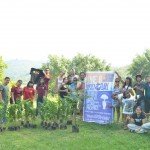 Located on the coast about 80 miles north of Manila, where our partners Gershom and Melissa from the non-profit organization Raggapo (“Saving The Youth Through Music”) organized a reggae concert at the Halfmoon Beach Resort in honor of Unfuck The World Day 2013. They had a couple of amazing pre-events to raise money for the concert, including an overnight nature trip and tree planting event. 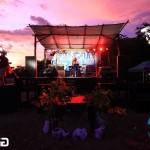 What a spectacular setting!

The line-up of bands was impressive: Grass Roots; People’s Future; Kalookan Dub Kollektive; Herb Culture; Mental Freedom; MaryWanders; Sweetcancer; Smoke Bandits; Katribu-kolektib; DangerBoy; Herb’s Men & more took the stage that was set up on the beach at the resort, and over 300 people showed up to celebrate and to bring donations in form of tree seedlings! Video will be coming soon; for more info, please also check their Facebook Event Page

UTW Day 2013 in the UK took place as part of the Summer Sizzler at the Cargo, a venue in the heart of East LONDON‘s hip Shoreditch district.

Names of bands and charities can be found on the FB event Page. Proceeds made from Unfuck The World t-shirt sales and from ticket sales benefit The Ocean Project and WaterAid. 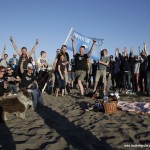 Set in front of the scenic background of Europe’s third biggest harbor, the UTW Day party in HAMBURG, GERMANY took place on the beach at the river Elbe in Övelgönne. Everybody was invited to join, admission was free and it was byob (Bring Dir Dein Bier Mit). Heaven was on their side, Saturday was one of the few sunny and hot days in usually windy and rainy Northern Germany, perfect for a beach party. Everybody had a great time, people met old friends and made new ones and enjoyed performances by actresses Malin Steffen and Pia Koch, singer/song writer Bernd Müller and guitarist Christopher Dierks. (see video link on the right). 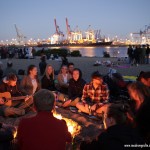 Gathered around the fire in Hamburg

Proceeds from Unfuck The World t-shirt sales will go to Hinz & Kunzt, the Hamburg Street Magazin benefitting the homeless. Here is an article in the German paper Elbe Wochenblatt, talking about Unfuck The World 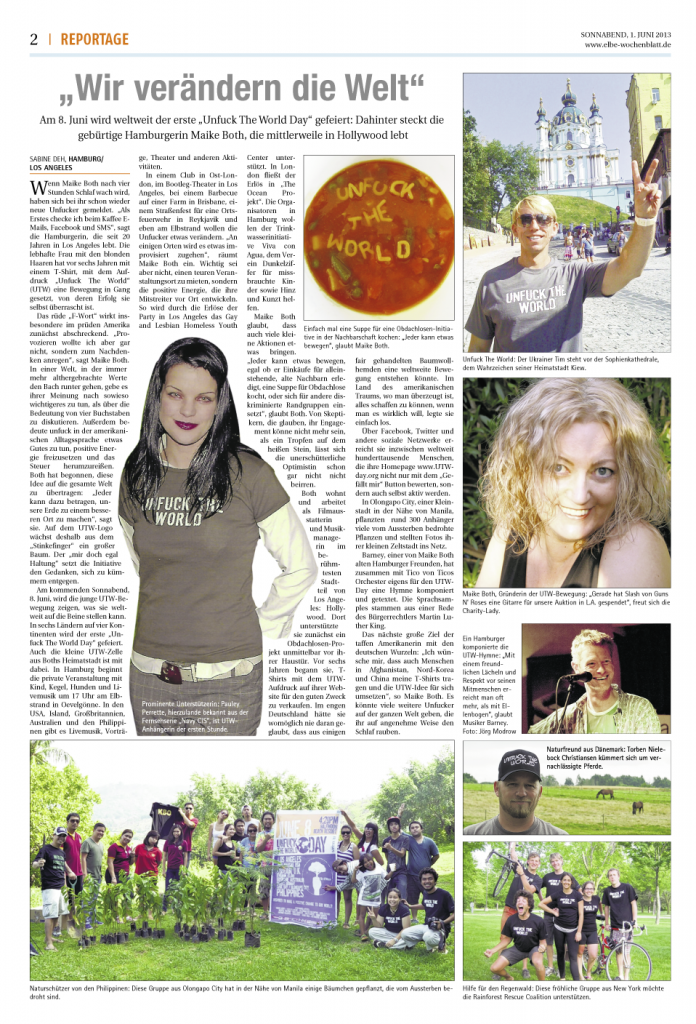 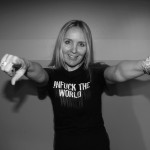 Our team in Reykjavik- Snaya Thorleifsdottir (Marketing & Promotion) , Irene Greenwood Povlsen (Music Liaison) and Augusta Einarsdottir (co-owner of Elf Films; Video Production) was recently joined by Sigtryggur Baldursson, drummer of Björk’s legendary band, the Sugarcubes, and internationally renowned Icelandic photographer Vera Palsdottir. Together, they produced an amazing video (see link on the right) including Icelandic musicians, celebrities and every day people who all have one common goal: to unfuck the world, shot on the street of Reykjavik where they have 20 hours of daylight each day in June. 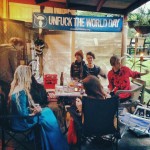 The event in Brisbane took place at a private residence; they had a bbq and potluck, local bands performed and each guest brought three items to be donated to one of the following charities: Vinnies, SC Animal Refuge and Sea Shepherd. You can see a pre-party shout-out by party host Muzza (see link on the right), more videos will follow 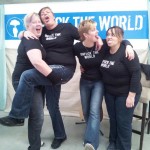 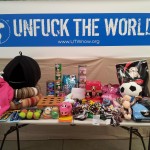 To be more accurate, the location was in Traralgon, outside of Melbourne. Please check the video on the right, an interview between Melissa, who hosted the party, and the woman who runs the animal shelter that benefitted from the donations.

In honor of Unfuck the World Day 2013, Amanda in MAKANDA, IL, USA, held a donation drive at her house, benefitting Food Not Bombs. There was music, food, and all were welcome. 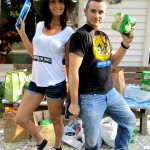 Unfuckers with donations for Food Not Bombs!

Buddy and his wife in GRAPEVINE, TX, USA threw a party in their backyard, and their guests were asked to bring canned goods, clothing and toys to be donated to GRACE, an organization that provides assistance to individuals and families in crisis and guidance to self- 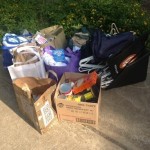 Some of the items that were donated to GRACE 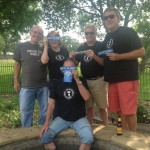 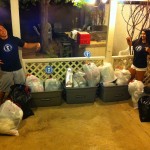 Kerm and Nicole in HENDERSON, NV, USA had a party in their backyard; the two organizations they will donate to are Vegas Roots Community Garden and Nevada Partnership for Homeless Youth. In addition, they are also looking into various avenues in which they can volunteer their services throughout the summer!

Chrystal in BATH, ME, USA had invited her friends to gather at the local park in the afternoon and hand out information/fliers about Unfuck the World Day to give people ideas as to what they can do to make a difference and spread the word as well as take up a collection for the local Ted Ford Homeless Shelter for food and household items. However, due to heavy rains, Chrystal had to cancel the event, but is planning t have it some other time. And why not. Every day can be Unfuck The World Day… 🙂
Corinne in CHARLESTON, SC, USA , organized a gathering of family and neighbors, and their contribution to Unfuck The World Day was a hands-on neighborhood clean up as well as a donation drop off at Soles 4 Souls. 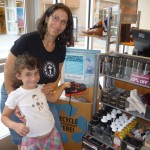 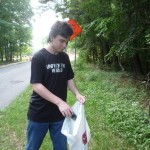