… and people in 10 different countries followed our call to organize positive, local actions.

In 2015, we had 10 events on 4 continents – Asia, Oceania, Europe, and North America – including our flagship event at the UTW Headquarters in Los Angeles, and for many what was planed to be a one time thing turned into ongoing actions.

We thank everybody from the bottom of our hearts for the endless energy and love that was put into these events and for making a difference, and we are looking forward to UTW Day 2016!

This year’s UTW Day event here at the Headquarters in Los Angeles was the best one yet! It was all about what UTW stands for: community, positive, local action, compassion and breaking down barriers.

Happening in the heart of Hollywood, our event was all about homelessness, especially that of youth and young adults, and about what people are doing what they can to make a difference. 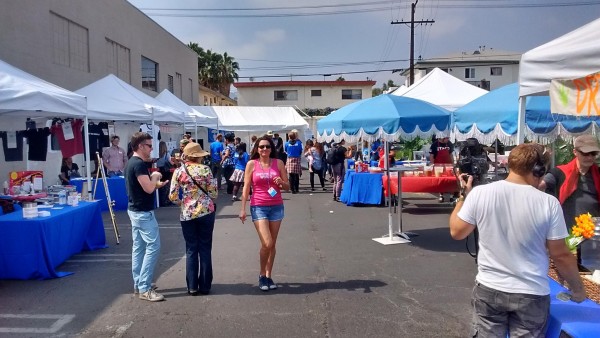 Our beautiful UTW Day fair in the heart of Hollywood

Omega Cinema Props let us use their parking lot on Santa Monica Blvd. for free, and many other companies affiliated with the film industry supported us through in-kind and monetary donations.

The event started at 2:00 pm  and it didn’t take long for the parking lot to fill up. It as a beautiful, perfect L.A. summer day, and the white tents and blue umbrellas created the perfect background for our blue and white Unfuck The World banners…

The focus this year was on the homeless and at-risk youth and young adults in the Hollywood area. When we first started planning the event, we had the vision to have an art show with pieces created by them, and so we went to the local shelters and to the streets to find artists who wanted to participate. The results were amazing! We had almost 30 pieces created by homeless kids, and another 30 or 40 that were donated to us by international artists who wanted to support our efforts, and the quality of the art was superb! 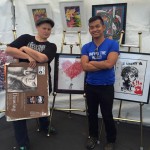 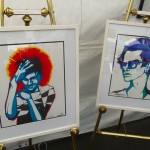 Two of the amazing pieces created by young, homeless artists 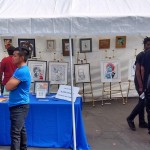 The quality of works that was submittted to us was incredible 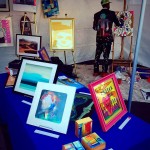 The most beautiful part was to be able to give those young artists a  platform, and we are most excited to say that we were already working on organizing a follow-up event, an art show at Wallspace, a gallery  in Hollywood where these young, homeless artists are invited to show their works for a full week in a professional setting, including an opening night featuring a DJ and a bar. What an incredible opportunity! Gallery owner Valda Lake has been more than supportive, and we couldn’t be more stoked! This is exactly what UTW is about! But back to UTW Day 2015…

Another part of our event were representatives from organizations such as My Friend’s Place, a drop-in center in Hollywood that assists and inspires homeless youth to build self-sufficient lives and that has received a lot of attention lately through Miley Cyrus’ support.

Also represented was the Youth Center on Highland, a shelter for youth up to age 25 that focusses on the needs of the GLBT community, and that offers a number of services, from laundry, showers and clothing to counseling, health care and education.

People from American Street Kid, Occupy Venice, Brian’s Orchard’s Youth Alliance, Give a Beat and Clear Skies Ranch were also there to network and represent their organizations, and there was a steady coming and going at their tents and all day, contact information was exchanged. 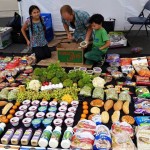 All this… from dumpsters? 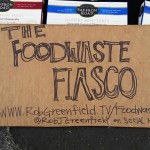 Rob Greenfield has organized Food Waste Fiascos throughout the USA 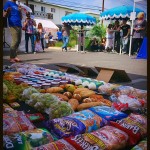 Even organic food was found in dumpsters around Hollywood

One of our heroes, Rob Greenfield from San Diego, was not only able to join us for the event, but he actually came to L.A. the day before the event to go dumpster diving.

“Dumper diving?’, you may ask. Yes. Rob has traveled across the USA on a bicycle, raising awareness of the fact that an incredible amount of perfectly fine, edible food is thrown out by grocery stores on a daily base, an unbelievable sin, especially, when so many go hungry.

Another highlight of our event were our live video calls with organizers of UTW events around the world and supporters in countries as far away as Australia, Singapore, the Netherlands, Germany and Poland. 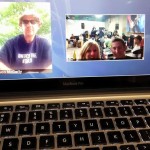 Live video calls around the world 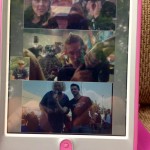 The video calls were followed by hourly raffle drawings where we gave away super cool prizes, like a GoPro, an iPad, a flat screen TV and gift certificates to free boxing class, Pilates sessions, a facial, a VIP tour of Warner Bros. Studios, and much more.

Many people stopped by to make in-kind donations such as clothing and toiletries, or just to enjoy the music by DJ Merc80 and a yummy, freshly made jalapeno pineapple lemonade…

At the end of the day , we had raised over $7,000 through art and raffle ticket sales as well as through monetary donations that were made to benefit our non-profit, A Million Drops.

Here some impressions from throughout the day …. 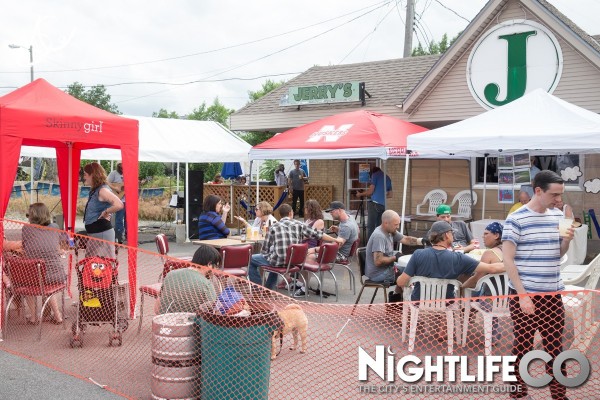 Our event went smashingly! We had probably 300-400 people in and out all day long at a great friend of mine’s bar – Jerry’s Bar. We had 14 kegs donated and all the money went to charity, we had a silent auction online with amazing artwork donated from all over the country and a piece or two from abroad. We had nine bands play from Noon-11PM. We had a whole hog roast and a small food competition. We had our 3 charities represented in booths.

We had kids, dogs, and people of all ages come together for this great cause! So proud of my team: Rob Rutar, Nadia Shinkounas, Rachel Patel, and my wonderful volunteers and our great bar staff for helping make this possible. Final numbers coming, but I think we raised about $4000.00!!

Stronghold Art Collective raised over $365 to go towards planning a youth art or music program that would be free to the public… In addition, we collected diapers in all sizes that were donated to the Lindsay Community school to help with a local teen mother program aimed to keep kids in school….

We also had lots of art and culture, and we look forward to working with UTW L.A. again next year to showcase UTW 2016 in San Diego!

Our Lethbridge event was a ton of fun, full of inspiring company and conversations. We started the day with a meet up in my backyard, followed by a dance walk in the afternoon. 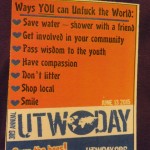 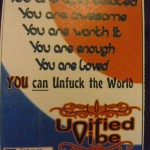 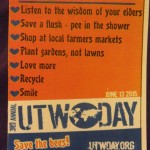 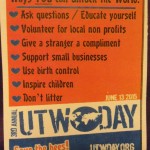 We walked a block over to a local park where ‘Nature Play Day’ was being held (a fundraiser / gathering to promote The Helen Schuler Nature Center, which was also our chosen organization) with a boom box in a wagon and armed with ‘love notes’, Unfuck The World flyers and bee bombs. 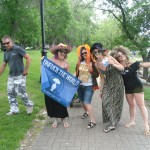 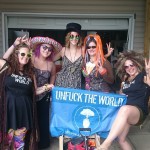 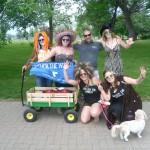 We dance-walked around the lake, shouting ‘We are the change! You are the future! Save the bees! You can change the world! We love you!”, handing out our goodies to all that would take them. Everybody smiled and thanked us, and our ‘bee bombs’ were a huge hit – people were very receptive and loved the concept, with many asking how we made them, wanting to give them away to others as well. Our dance walk lasted over an hour, and for lifting spirits and spreading positivity I give us an A+.
-Daysha

In Dublin, we gathered positive people in an original and bright venue called the D-light Studios around several activities from 10am to 10pm. The event was sponsored by the Pygmalion who support the project and share the concept!

People could enjoy a little market with eco friendly, fair trade, natural or organic products. There was also a wonderful exhibition of sacred mandalas by Patricia Fitzgerald, a relax corner with healers and therapists, a space dedicated to talks and workshops and a kids’ area with bouncy castle…

During the afternoon we enjoyed a Bollywood dance show by Joan Pires from Mumba Dance and at night, we had the pleasure to listen to great music from  different gifted artists: Laura Ann Brady, Aisling Jarvis, and the Look Out Below!

Money was raised for two local charities, Clown Without Borders Ireland  and E-ducare. Due to the exceptional beautiful weather in Ireland (very rare) on UTW Day, we had not enough people to be able to raise much money …however, everybody had a good time and it lead to amazing interactions between all the participants.

For sure, next year will drive more people thanks to a positive word of mouth and the awareness of the UTW movement in Ireland can only get bigger !

Love to all from Dublin.

Our UTW Day event, held at Star Bar in Traralgon, could be described as nothing less than an amazingly successful and inspiring day! We put on an afternoon of trivia, auctions, raffles and live music, and not only did we have a day filled with fun, laughter, entertainment and awesomeness, but we also managed to raise over $2,000 of much needed funds for two very worthy and important charities in our community. 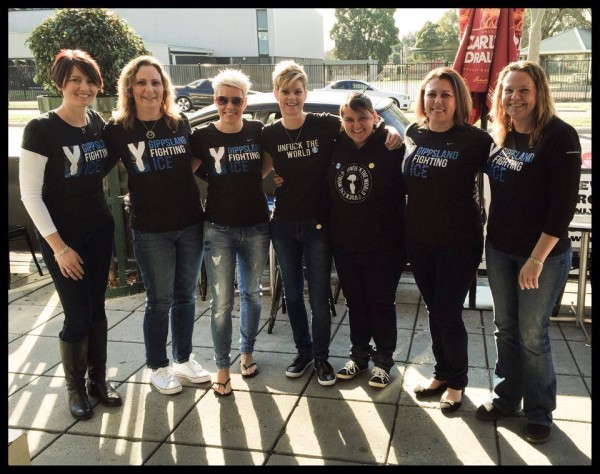 Of the over $2,000 that were raised at the event, almost half went to the Gippsland Fighting Ice Company

The Gippsland Fighting Ice Campaign received $987.65 that will go towards their ongoing fundraising efforts to employ more Youth Support Workers to help young people in the region to make better decisions and not resort to drugs when circumstances in their lives turn bad. Currently only two Youth Support Workers cover an impossibly large area, so more help is definitely needed.

Kaya’s Mission received $1053.85, that will be used in their ongoing efforts to rescue, rehabilitate and rehome dogs from breeding facilities. It costs about $1,000 per dog to achieve a positive result, so we’re very happy to be able to contribute this amount. 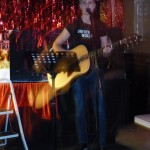 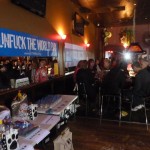 People had a great time with trivia, auctions, raffles and live music

Overall, the event was a massive success, largely due to the hard work and love put in by everyone involved!!!